Age 1-12, Military kid
My parents were officers in the U.S.A.F. so every 3 years we moved. I was born in Washington (1952), then lived in Morocco, Texas, England and finally Southern California. It was difficult for me to often be the new kid without friends. I loved reptiles and went to church twice in my youth, just to try it out, since our parents never went.

Age 13-19, Surfer/druggy
I was agnostic, following my dad’s faith. I surfed and smoked marijuana for a few years. This lead me to receive Christ and live as a Christian.

Age 20-28, saved from sins
I became a religious fanatic for a little over 40 years. In our first Church we daily had spiritual meetings, lived in brothers and sisters homes, did open-air preaching and door to door evangelism to mention a few of the events we were involved in. 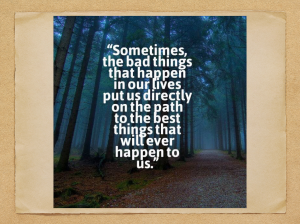 Age 28-37, working our way to heaven
Shelley and I got married and had three children. Because of the demanding religious life we lived we became quite weak and sickly, especially myself. I had a nervous/physical breakdown in the mid ’80’s.

Age 38-52, learning grace
Poor health progressed to where we had to leave this church which had become controlling and abusive and we then went to an evangelical church.

Age 53-61, becoming advocates
After finding out about our younger son’s same sex orientation it took me about five years before I would admit it was not his choice, but rather God’s in making him that way. Our daughter, who was also gay, got married to a woman. We then had to say “good bye” to our conservative evangelical church.

Age 61-63, learning 3rd way
We were becoming more universalist and more accepting of those who differ from us, even in their faith and perception of God. How our beliefs had so changed over the years! Before we were ‘so sure.’ Then we realized we were ‘so wrong.’ At the beginning of 2016 things really started to change and more rapidly so for us.

Age 64 +, conscious acceptance
Excerpts from my journal during this transition
I am an “underdog.” All my life God has been calling me to the under-privileged, to stand with Jesus, the outcast.

I became less and less sure of: going to heaven, rapture, what sin is, its judgment or redemption from it (atonement theory), hell and the devil. At the same time I became more sure that: God is sovereign and benevolent, He is love. 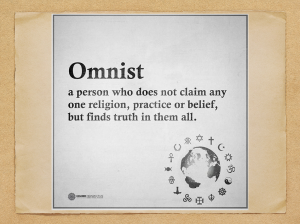 If my evangelical friends knew what I was considering now as truth, they would be appalled: Gay marriage, universalism, reincarnation, centering prayer and meditation. But, the Christianity in which I have been raised is too self centered and narrow, us vs. them, the elect and the damned, I am right and everyone else is wrong.

We were awakening to the idea that things are not as they appear:

Do we come to earth for learning? To learn what it is like to have limitations, to experience pain and evil? Are we learning God and He learning through us? Are we pure light and pure love?

The truth was given to the Jews and they misinterpreted it as “we are the chosen”. God is on our side and against them. We no longer can see ourselves as One with all. Then Jesus came and taught us the gospel. But over the ages and by all the divisions of Christianity we have reduced the gospel to God rewarding everyone according to what they deserve. The “good” go to heaven and the rest go to eternal torment, because they justly deserve it. And since God is holy and just, even He cannot save them from it. The Christian religion has become riddled with fear. There are two great monsters to avoid. One is the devil, and the other is infinitely worse.

Am I a Christian? I no longer believe in ‘atonement for sins.’ And I abhor the attitude of favoritism, that we are special, chosen, and all else are not.

You and I have no idea who I AM. Is self-discovery and God-discovery one and the same? This is ‘hidden in plain sight’ at its best. In me are all the perfections of divinity and all the flaws of the flesh, what a beautiful mix!

My soul wants to experience so much that my ego wants nothing to do with. Consciousness is guiding the universe to experience the best of all scenarios. This is so clearly demonstrated in the book of Esther. We have nothing to fear, and every reason to surrender to the leading of this Universe of love.

yet a little more …